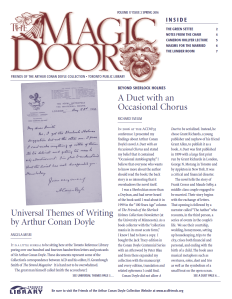 In other news, I wrote an article for a fantastic Sherlockian magazine called The Magic Door and it’s featured on the front cover of their spring edition!

In the article, I highlight the themes that appeared in letters between Arthur Conan Doyle and his editor. The universality of the themes like writer’s block and arguments over editing made me feel even closer to ACD and I think make for an interesting piece.  Click on the graphic to read through the PDF version of the magazine.